Some Toll-like Receptors (TLRs 2, 4, and 5) are found on the cell surface, where they may bind extracellular PAMPs. Other TLRs (3, 7, 8, and 9) are found within the cells, on endosomal membranes and recognize viruses that have been phagocytosed by cells.

TLRs 3,7,8,9 are found on lysosomes within the cells. They are activated by intracelllular agents (viruses). The pathway is: TLR activation --> kinases --> gene transcription --> TNF, IL-1, INF alpha/beta.

Signaling pattern-recognition molecules, for example, toll-like receptors (TLRs), lead to activation of genes which in turn lead to a specific immune response. TLRs got their name from toll, a membrane receptor in the Drosophila fly which provides resistance to fungi. TLRs are the first point of contact between the immune system and a pathogen. 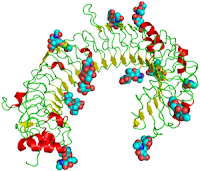 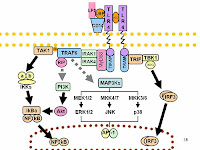 TLR 2
Two
TB and other mycobacteria

TLRs on the surface of the cells bind surface molecules: flagellin on flagellated bacteria (TLR 5), LPS (TLR 4). Our innate immune system recognizes LPS via the LPS signal transduction pathway, which has the trimolecular complex of CD14/TLR4/MD2 at the core. CD14 was the first described pattern recognition receptor (PAMP receptor).

TLR 3 binds to ds RNA which is never present in humans.

All TLRs except TLR 3 go through MyD88. MyD88 is an abbreviation for Myeloid differentiation primary response gene (88) (MYD88).

There are 12 mammalian TLR genes (11 in humans). All TLRs are membrane glycoproteins. There are 11 different human TLRs, named TLR 1 to 11.

There are 2 groups of TLRs:

What are the intracellular TLRs?

TLR 3, 7, 8, and 9 are in the intracellular compartment and detect nucleic acids.

MyD88 is an adapter protein that plays a role in TLR signaling. MyD88 is involved in all TLR-signaling pathways except TLR 3.

TLR4 can signal through both MyD88-dependent and independent pathways.

TLR agonists, such as imiquimod (TLR 7) and resiquimod (TLR 7 and 8), are used topically for their antiviral and antitumor effects.

Filaggrin is essential for epidermal barrier function. SNP associated with eczema and asthma.

CD14 is a lipopolysaccharide (LPS) receptor. SNPs associated with asthma and atopy.

CCR5 is a chemokine receptor. SNP can be protective against asthma.

Good work, straightforward, & fantastic work!
Your information is inspiring to me and these things did help to others.
Thanks for sharing!


My url: www.biotechnology-genetic-humancells.blogspot.com
I also invite people to use my links and read more.

Endorsed by AAAAI and ACAAI